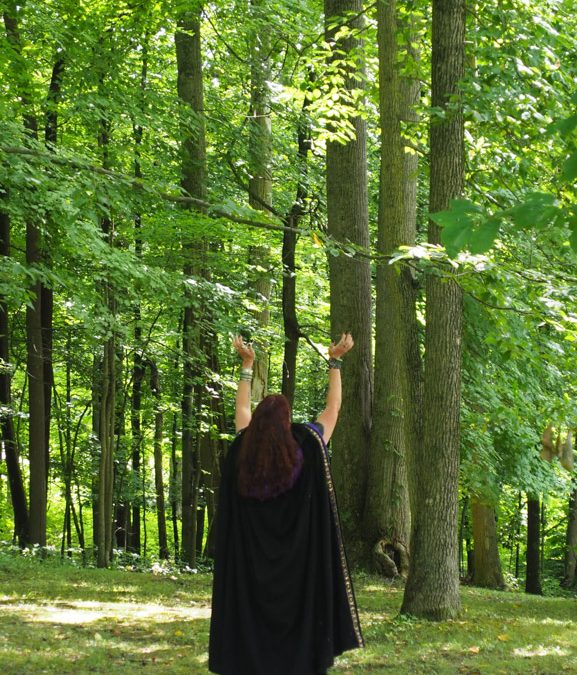 Wicca & Witchcraft are terms often used interchangeably, as if they’re the same thing.  Are they?  In a word, no. Pop culture and media often fail to make the distinction between the two. Are the lines between the two blurred? Yes, indeed they are. However, if you ask a Wiccan if she/he is a Witch, you may very well get a “no” answer. If you ask a Witch if she’s a Wiccan, you may get a “yes” or a “no”, depending on her/his practice.

Wicca is a ditheistic religion, a spiritual belief system like Christianity, Judaism or Islam. The difference is that Christianity, Judaism and Islam are all monotheistic and patriarchal. While Wicca acknowledges the equality between the Goddess and the God, it does have matriarchal tendencies. It’s influenced by pre-Christian beliefs and practices of western Europe that affirm the existence of magickal powers in nature and of both female and male deities. It also emphasizes the ritual observance of seasonal and life cycles, called Sabbats. Before we go any further, let’s talk about the “k” in magickal. Truly, I didn’t spell it wrong. Practitioners of folk magick use the “k” to differentiate between their practice and that of stage magicians.

Moving on: Wicca, also known in some circles as “The Craft” (here we go blurring the lines) was originated in the mid twentieth century by Gerald Gardner. Just as Christianity is divided into sects such as Presbyterians, Baptists, Methodists, etc., Wicca also has sects. Gardner’s version, or sect, if you will, is called Gardnerian Wicca. He was followed shortly by Alex Sanders and his wife. Their sect is Alexandrian Wicca. There are more sects, such as Dianic, Norse, Celtic, Solitary, and Seax. Although they all have separate rules, codes, etc., they all fall under the umbrella of paganism. They also all follow the Wiccan Rede which is basically “as long as you harm none, do as you will” and the Threefold Law: “whatever energy you send out will return to you times three”. It’s important to note that not all Wiccans are Witches. Many Wiccans focus solely on their relationship with the Divine and their spirituality. These Wiccans don’t cast spells or practice magick of any type.

Witchcraft, on the other hand, is a practice, not a religion. Witches can be a member of any religion, if they so choose, and still practice Witchcraft. Witches practice folk magick using personal energy in conjunction with the energies within stones, herbs, colors, lunar cycles and other natural entities. A Witch’s practice can be and often is as different as the individual. For instance, Witches may practice other types of occultism including but not limited to: divination, astrology, spirit communication and demonology. They may also practice Santeria, Hoodoo or any number of magickal practices from countries and cultures around the world. Some Witches are capable healers who have knowledge of herbs, minerals and alternative science that allows them to heal people at a distance.

Most traditional, or “Olde World”, Witches are independent thinkers who intend no harm to others. It’s important to note that Witches who practice Witchcraft are not bound by the Wiccan Rede and Threefold Law. Some will take on the label of White Witch to show that they don’t practice any magick that may harm others. On the other hand, there are Black Witches who solely practice magick with evil intent. In between, there are Grey Witches. They generally intend no harm but will do as they must to protect themselves and loved ones. Please note that these are generalizations for the sake of understanding. Unfortunately, there are still many, especially in English speaking countries, who consider all Witches to be evil and Satan worshipers. It can’t be stated often or plainly enough that this is not the case. Yes, there are some, but they are not the majority.

To further blur the lines, muddy the waters, and cause confusion between Wicca and Witchcraft, many books and articles aimed at beginners will use the terms Wicca and Witchcraft interchangeably. This could be because many Wiccans eventually find themselves drawn to Witchcraft but it should be stated that they are two different matters.

Personally, I practice Witchcraft. I am not Wiccan. When someone labels me as Wiccan, they’re assuming that I am part of that religion. It’s akin to calling a Baptist a Methodist or vice versa. To an outside observer it may not make a difference. To me and many other Witches, it makes quite a difference. The person who assumes I’m Wiccan also assumes that I follow the Wiccan Rede and Threefold Law which are both generally known in the mass public. They might find themselves unpleasantly surprised should they cross me or someone I love. Just saying.

It’s important to remember that Wicca is a religion and Witchcraft is a practice. Not all Witches are Wiccan and not all Wiccans are Witches. The focus of Wicca is on the Goddess and God, the seasonal and life cycles and one’s spirituality. The focus of Witchcraft is on the use of personal and natural energies in the practice of folk magick to bring about a specific goal. If there is any question as to whether a person is practicing Witchcraft or following Wicca, it’s always better to ask than to assume. Then again, isn’t it usually better to ask than assume in situations where understanding isn’t as complete as we’d like?

What about you? Do you feel the call from either of these paths? Which one, Wicca or Witchcraft, do you feel drawn to? Do you hear the call from one of these yet are hesitant, maybe even slightly afraid and understandably so, to step out of the “broom closet”? If you’d like more information, these websites may help:

If you’re just not sure, or feeling fearful, I would be honored and welcome the opportunity to help you find your power, step out of the “broom closet”, and claim your soul’s inheritance. Now more than ever, it’s time.